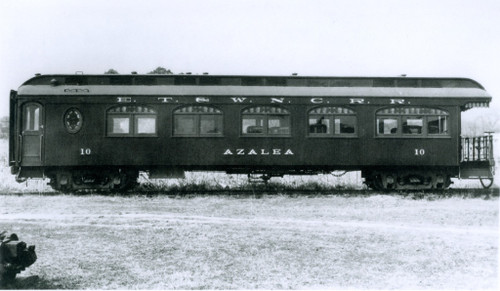 Built in the early 1900's and purchased by the ET&WNC Railroad in May of 1912, the Azela served as a parlor car aboard the line from Johnson City, TN to Boone, NC. The Azalea hosted many excursions for railroad executives along with financial investors. Riding in the parlor car was the true defition of luxury as passengers traveled into the mountains. Over the years, the Azalea became one of the most photographed passenger cars on the railroad and was often found on the rear-end of passenger trains. This 40' narrow gauge passenger coach became an icon and recogniziable part of ET&WNC history.

We are proud to announce that this is the first commercially produced model of the Azalea in HOn3. Designed from the drawings of Cass, found in the 2001 September/Octber edition of the Narrow Gauge Gazette (Cass drawing), this model features details from the unique shape/layout of the Azalea all the way down to the door knobs and rear-platform railings. Please note the Cass drawings used for this car were for a 44'6" car, which is what we have modeled, as opposed to 40', the true length of this coach. This is a small issue that would require a complete redesign of the model to fix, at this time there are no plans to redesign the car.

This kit requires the following for completion: