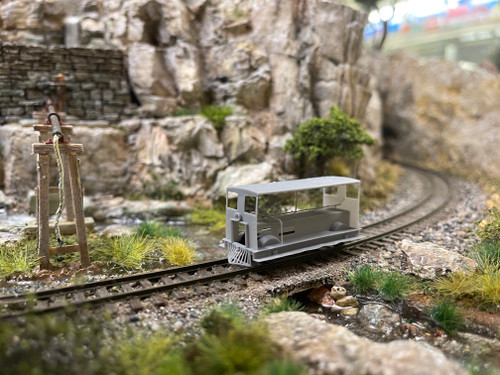 The ET&WNC 1 served as the railroad's first motorcar, built for the use of the section foremen. For less than $600, Clarence Hobbs converted an old, wrecked Ford into a narrow gauge masterpiece. The motorcar was officially placed into service on March 15, 1939. After a successful completion of the motorcar, a second was constructed and numbered 2. Both motorcars featured a flathead Ford V-8 engine, however the 2 was built for standard gauge. Motorcar 1 was designed for use in both directions at track speed and sometimes hauled smaller cars behind to assist with maintenance of way (MOW) projects. This required a unique gear shifting assembly, which was deemed the Hobbs Box. Motorcar 1 has remained a part of Southeastern narrow gauge history and is still in existence today, accompanied by motorcar 2, at the Southeastern Narrow Gauge & Shortline Museum in Newton, NC and belongs to the Alexander Chapter of the NRHS. Restoration projects are underway to restore motorcar 1 to original condition and volunteers are needed! For more history, refer to the April-June 1999 edition of The Blue Ridge Stemwinder. A complete digital copy of all editions of the Blue Ridge Stemwinder can be purchased at http://cfordart.com/20yearsofthestemwinder/order.html

For the first time ever, the ET&WNC motorcar 1 is now available for purchase in HOn3! Our model features accurate details and scaling of the car based on the July 1943 Jack Alexander drawing. The following features may be added on to the model at the time of purchase:

This kit requires the following for completion: